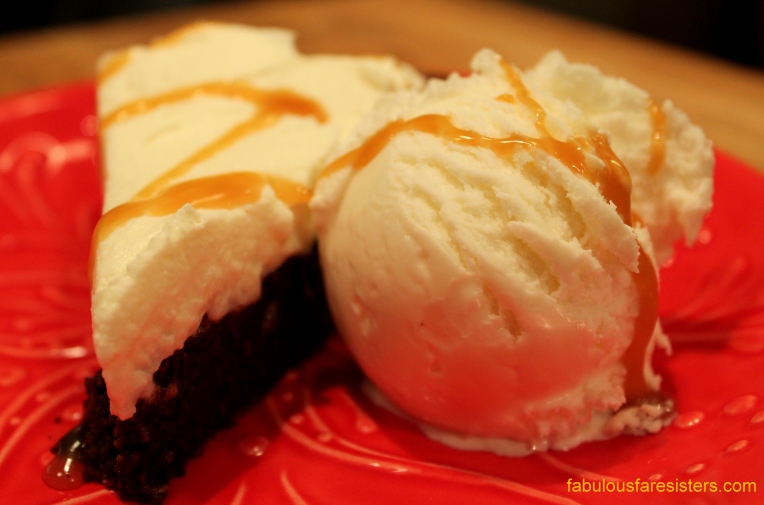 A few months ago we were invited to a wine & cheese party at a friend’s house. Everyone was to bring a wine and appetizer or dessert from a certain country or region. My husband and I chose the Lombardia/Piedmont regions in Northern Italy. We brought along some fabulous Nebbiolo, from the Piedmont region, which borders the Lombardia region on the west. And since I knew that Mascarpone cheese was made in the Lombardia region I wanted to find a dessert that complimented the wine. After searching for a while I found a chocolate cake that used mascarpone in its icing. The cake was flourless, and I had never made a flourless cake before, but I decided to give it a try. Boy am I glad I did…it was absolutely delightful!

When I made the cake back in February my boys could only take a peek – no bites for them! So last night I made it again so they could taste it too…they loved it…and so will you!

Butter a 9″ springform pan and sprinkle with one tablespoon sugar. Heat oven to 350 °F. In a large heat-proof bowl, combine the chopped chocolate, oil and butter. Set the bowl over a saucepan of simmering water and stir until melted. Separate four of the eggs, placing the egg whites in a large bowl and the yolks in a separate bowl. Add the cocoa powder, vanilla, salt, 1/4 cup of the sugar and the remaining two eggs to the egg yolks. Whisk until smooth. Gradually whisk yolks into the melted chocolate mixture. Beat egg whites until frothy and gradually beat in 1/2 cup sugar; beat until firm peaks form. Gently fold egg whites into chocolate mixture. Pour batter into the springform pan. Sprinkle remaining 2 tablespoons on top of batter in springform pan. Bake in heated oven for 35 minutes. Remove from heat and cool. Cake will crack and fall while cooling. This is normal.

Meanwhile, prepare the mascarpone icing: Combine the heavy cream, mascarpone cheese and powdered sugar in a large bowl.  Using a mixer, blend until soft peaks form. Refrigerate icing until cake has cooled. Spread icing onto the top of cooled cake. Serve alone or with a scoop of vanilla ice cream drizzled with caramel syrup.

This site uses Akismet to reduce spam. Learn how your comment data is processed.